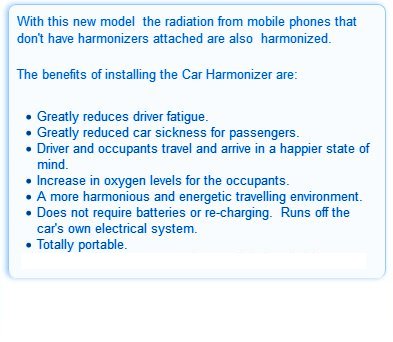 The Car EMR Harmonizer is a totally portable Electromagnetic Radiation neutralizer which eliminates all noxious EMR energies caused by the cars electrical system, and also eliminates the depleting effects of other outside noxious energies such as Earth Magnetic Grid lines while driving.

The EMR field produced by the cars electrical system totally engulfs all
occupants, placing them in a dangerous Positive Ion field which deprives its occupants of oxygen and depletes them of energy and causes nausea and fatigue. Concentration levels for the driver area also affected by these noxious energies.

The frequency of Earth Magnetic Grid lines that pass under the car while driving also has as debilitating affect on the occupants which exacerbates the already noxious energies within the car.

The Harmonizer works similar to the Geoclense for buildings. One has to feel the very tangible difference in driving experience to appreciate just how well this device works!!

The benefits of installing the Harmonizer are;

The harmonizer does not require batteries or re-charging. It runs off the car's own electrical system and is totally portable.

Recent modifications in the technology used to produce these devices has made them effectively stand alone. When you drive your car using the car harmonizer, you are effectively driving in a protective bubble where you are protected from all forms of Geopathic stress.

I am a truck driver and having one of these really helps me feel alert for long trips.