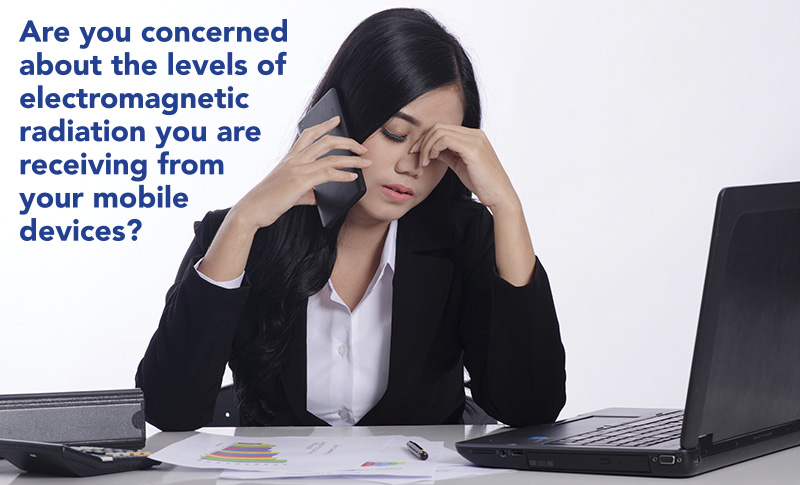 Did you know that Wi Fi technology along with Mobile, Portable, Cordless and Cell phones, give off the most aggressive form of electromagnetic radiation known to man, because interferes with subtle brain waves and our DNA?

This Wi Fi EMR Protection and Mobile Radiation Neutralizer is designed to eliminate noxious radiation emissions. The Neutralizer creates a healthy life-force energy field which scatters the microwave emission and at the same time reducing the ‘hot head’ syndrome which usually accompanies mobile phone users. It is also of benefit for portable handsets, which also emit electromagnetic radiation and microwave fields.

Simply attach the Neutralizer to the rear of your computer / laptop or notebook near the antenna or anywhere near where the signal comes in. Did you know you are sitting in a Microwave Signal every time you use your computer with Wi Fi? This Wi Fi EMR Protection and Phone Radiation Protector will protect you, your friends and your loved ones from causing any further damage while using this technology, plus increase the oxygen in the air around you.

In order for the signal to get to your computer, it has to go through the air from the Wi Fi device to where you are using your computer, hence if you are in a Wi Fi Cafe, you are not only sitting in the microwaves, but if several people are using their laptops around you, you may have several beams going through you all at once.

Our Wi Fi EMR Protection & Phone Radiation Protector is an absolute must for every type of cell phone, mobile phone, portable phone (yes the one you have at home or in the office!), cordless phone and every computer that uses Wi Fi technology.

The Wi Fi EMR Protection and Phone Radiation Protector stops that burning hot head feel and nauseous feeling while engaged on your cell phone, or computer while using your Internet Wireless Network Connection . Prevents damaged DNA from direct signals to your phone, laptop or computer.

Can be easily tested by Kinesiology, Muscle or Pulse testing to show that you are no longer putting your body under stress whilst using your computer, cell phone or Wi Fi devices.

Place one of these on your WiFi attached to your laptop to protect you from the Microwaves that are generated from it, and DO NOT use your WiFi or router without one of these. 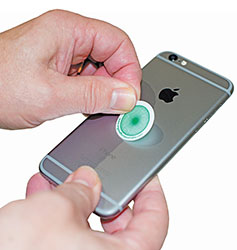 Simply open your mobile phone, and slip the paper thin disc under the cover of your battery - easy! No need to place adjacent to antenna. With your EMR radiation generating router, simply peel the disc from the centre and stick it onto the bottom of the router. If you own an Apple IPhone you will know that you cannot open the phone so what is the solution ..... easy! Simply peel the sticker from the centre of the card, and stick it onto the back of your phone (self adhesive). Note that it is not necessary to peel the sticker from the card for phones that can be opened.

A technical explanation on the cell phone harmonizers

In a typical GSM mobile systems base station cell, there are only 7 available frequencies (either in the 900 MHz or 1800 MHz range). Two of these are reserved for internal system administrative purposes (control bus, synchronization) which leave only 5 frequencies available for customer phone calls.

In a continuous send and receive mode that would be unsatisfying while only 5 customers could be served at the same time. Therefore, in a GSM-cell, all calls are time multiplexed. For instance say that each user gets a time slot of 5 ms and that the repetition rate for this user is 100 ms, which would provide 20 users per frequency and hence 100 users per cell at the same time.

This means that the antenna of the mobile phone is switched on and off according to the multiplexed period. Now this switching on and off gives rise to some unwanted side effects. Each time the electrons in the antenna are forced into movement in the beginning of a send cycle, you will get typical transient behavior in the beginning of each pulse train (you will get peaks in the beginning, these peaks having a much higher frequency, or narrower bandwidth, than the original carrying frequency) estimated to be in the range of 10-300 GHz (bandwidth 1-30 mm).

In this frequency range, some cell structures of the human body and their behavior are extremely sensitive to interference from electromagnetic radiation. This interference is not of a thermal effects character, but of disturbed intra-cell communication and cell metabolism, a field in biology that has so far not been studied long enough in order to make sure that these frequencies should be harmless.

The Mobile Harmonizer consists of a thin film, onto which is etched (by laser technology) a crystalline structure that has a resonance ability in the mentioned bandwidth. Being subjected to a mobile phone, and its antenna radiation, the Harmonizer gets into sympathetic resonance with the GSM frequency and starts to emit (or reflect) radiation of this frequency, but without the transient peaks. This has the result that the peaks are “smoothed out” and hence the harmful transients are eliminated.

The use of mobile phones over a long period of time can raise the risk of brain tumours, according to a new Swedish study. Researchers at the Swedish National Institute for Working Life have looked at the mobile phone use of 2,200 cancer patients and an equal number of healthy control cases. Of the cancer patients, aged between 20 and 80, 905 had a malignant brain tumour and about a tenth of them were also heavy users of mobile phones. "Of these 905 cases, 85 were so-called high users of mobile phones," the study's authors said in a statement. "That is, they began early to use mobile and/or wireless telephones and used them a lot."

The researchers have also found a marked increase in the risk of tumour on the side of the head where the telephone is generally used. The study's leader, Kjell Mild, says the figures mean heavy users of mobile phones have a 240 per cent increased risk of a malignant tumour on the side of the head the phone is used. "The way to get the risk down is to use hands-free," he said.

The study defines heavy use as more than 2,000 hours, which "corresponds to 10 years' use in the work place for one hour per day". It defines early use as having begun to use a mobile phone before the age of 20. The researchers have taken into account factors such as smoking habits, working history and exposure to other agents.

Recent modifications in the technology used to produce these devices has made them effectively stand alone. This means that there is no longer a requirement to place the device onto a hard surface. When you carry the harmonizer in your phone, you are effectively walking around in a bubble 15 metres in radius where you are protected from all forms of geopathic stress.

The research has been published in the International Archives of Occupational and Environmental Health.

This is an awesome mobile phone harmonizer. I feel like I am getting less affected from the radiation emitted by my iPhone SE after I attached the harmonizer to the back of it.

We have these on all our phones, iPads and wifi devices. our phones produce less heat after talking I've noticed.

I know that this device has assisted a family member to feel much better by feeling more energized in shopping centers, or close to others with mobile phones and wi-fi. I personally also feel better since I have placed this onto my mobile phone so I do feel that it is working.

Wow, I found this mobile phone harmonizer to be very protective not only from the phone or mobile devices itself, but the surrounding radiation from wifi or cell phone beam. I can also this on my router or laptop too. Very powerful phone protection in the market. Thank you, Greg for your effective products to help save an energy sensitive individual like me.