Shipping calculated at checkout.
Share Share on Facebook Tweet Tweet on Twitter Pin it Pin on Pinterest
One of the most popular decks of tarot cards used today is the Rider-Waite Tarot. Its earliest publication dated back to 1910 in the United Kingdom. It is generally the first modern deck; and it continuously gains popularity until today as it is commonly used by most of the beginner tarot readers – and even the experts.

The designer of Rider-Waite tarot – Arthur Edward Waite (hence the name), was originally a member of the occult society the Order of the Golden Dawn. He collaborated with Pamela Colman Smith, an American artist for the illustrations.

One of the most important contributions of the Rider-Waite Tarot is its symbolism. The deck looks graphically simple, but the details it contains depict deep symbolism. It was made so, because the cards were initially designed to teach arcane idealisms and esoteric beliefs. 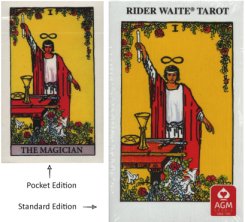 To help people comprehend the symbols in the Rider-Waite Tarot, Arthur Waite also published the book The Pictorial Key to the Tarot. The book contained an overview of the history, of the traditions and of the culture behind the symbols of the cards, their respective descriptions and interpretations.

The Rider-Waite tarot, also known as Rider-Waite Smith, Waite-Colman Smith or Rider deck, is popular because it serves as the basis of all modern tarots.
Both its Major and Minor Arcana portray scenarios in profound figures and images. Each of the cards was interpretable on its own without having to refer repeatedly to explanatory texts. Another unique feature of the Waite-Colman Smith tarot is the portrayal of subtle emotions and experiences that made each card brim with meaning and life.

The following cards belong to the Major Arcana (trump) of the Rider Waite Tarot: 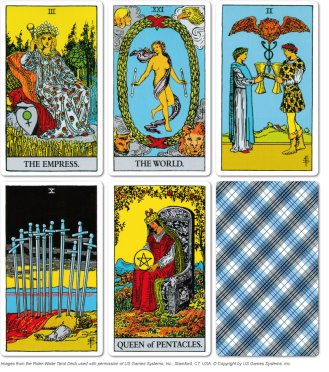 The Rider Waite tarot’s minor arcana is made up of four suits: the wands, cups, pentacles and coins.